Spurred on by his family and friends, Andy McInroy hasn’t looked back since choosing Man of Sperrin 2017 as his jump-off point into the world of sportives.

Where are you from?
Originally from Ayrshire in Scotland, now living in Park village in the heart of some outstanding cycling countryside.

How long have you been cycling?
Only seriously in the last year. Man of Sperrin was my first step into group riding and sportives.

How did you get into cycling?
I’m quite active in the local running scene but I had been struggling with some knee problems and I started using the bike to supplement my aerobic training. I bought myself a cyclocross bike shortly before Man of Sperrin 2017 and my enthusiasm grew from there.

Are you part of a cycling club?
No, at the moment I train on my own, but I enjoyed all the company on MoS 2017. Everyone was very supportive and I would certainly consider joining a club at some stage.

How did you hear about Man of Sperrin 2017?
My brother in law, Sean McGuinness is involved at Craigbane football club and pointed me towards last years event. A few of my work colleagues at Seagate were also going for it and I thought it might be something I could attempt.

What made you decide to accept the challenge?
I took the bike out a couple of months before the event and made my first attempt at Benbradagh. My cyclocross seemed to be well geared for the crazy steepness at the bridge and I didn’t have to put a foot down. I cycled on to the Birren and Brown Knowes sections and knew that the long route was within my capability if I paced myself. I entered as soon as I got home and knuckled down to some more regular hill training.

Did you train much in advance?
I trained regularly through the Spring, a mixture of running and longer cycles. I already had a reasonable fitness base from running races up to half marathon and running Derry Parkrun every week.

How well prepared were you for the hills?
By the day of the event I had done Benbradagh a few times. I have a favorite training loop which includes Dart and Sawel. If the organisers ever consider varying the route then I would recommend the Dart route up from Cranagh. At the bottom there’s a nice opener and near the top, there’s a climb which almost rivals Benbradagh!

Did you train specifically for the Man of Sperrin route?
Yes, I had explored the route as far as Draperstown. On event day, the southern end of the course was new to me. I really enjoyed some of the wilder terrain over Slieve Gallion and around Lough Fea.

What do you remember most about Man of Sperrin 2017?
My wife, Roisin McGuinness, is an optometrist in Maghera. She and my kids were well positioned on Benbradagh at the bridge with their cowbells. My daughter, sitting on the bridge,  actually features in one of the iconic photos of the day taken by Bruno Tamiozzo. The atmosphere and support on Benbradagh was really brilliant. There was no way I was going to put a foot down.  I enjoyed the experience so much that I did another five sportives during the remainder of 2017 including the Inishowen 100. However, I think MoS will live longest in my memory because of all that great support on the hill. 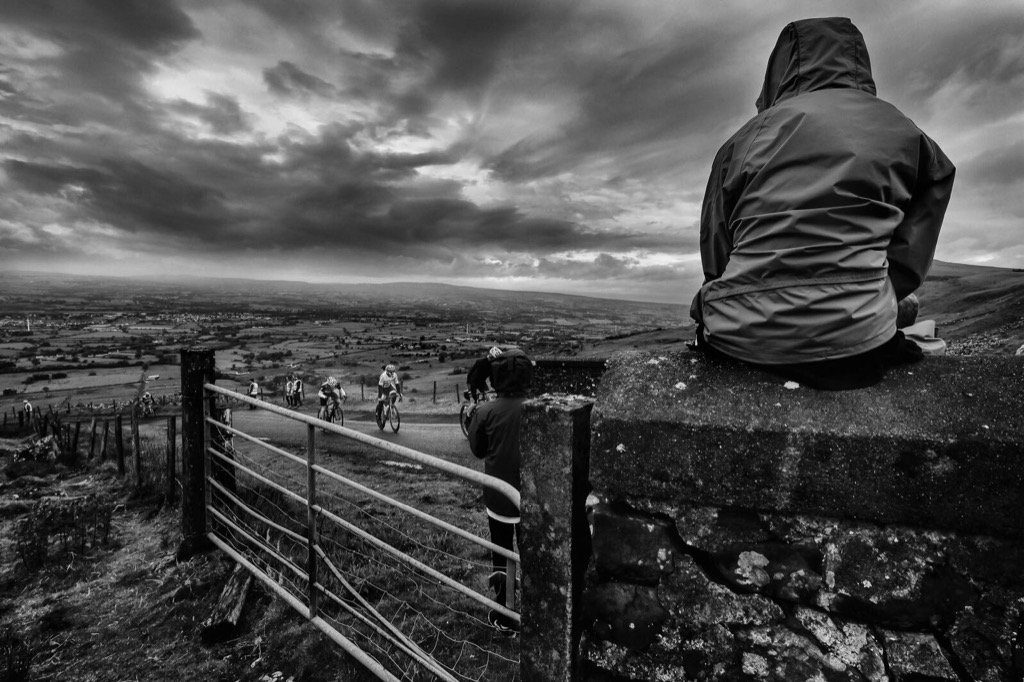 What is your target?
I’d like to improve my times on the main Strava climbing segments. The ‘Benbradagh Climb’ segment which I did last year in 13:51 is top of my list. I’ll be pushing hard. I just need to remember to hold some energy back for the other 90km!!

Any tips or advice for those thinking of taking on Man of Sperrin for the first time in 2018?
I would say not to worry about carrying too much food. You will be very well fed along the way. And don’t be daunted by Benbradagh, it’s over very early in the day and there’s no harm in putting a foot down. Just make sure to get ready to unclip !

What is the best cycling related advice you have ever been given?
Spin the legs on the hills rather than grind. Save the standing work for when you really need it. Eat plenty the night before and drink lots as you go. And finally, wear warm socks, even in May!!