Spokesman: In Defence of the MAMIL

Home/Uncategorized/Spokesman: In Defence of the MAMIL
Previous Next

Spokesman: In Defence of the MAMIL

Under siege and constant attack the MAMIL often finds himself saying ‘sorry’ for taking the time to train for events like Man of Sperrin. But gym-owner and self-confessed MAMIL, Paddy Heaney says the apologies have to stop.

The comment will be delivered with a generous dollop of derision and it’s always designed to hurt.

“So you’re another ‘MAMIL,” they’ll sneer. At this point, I have to suppress an overwhelming desire to land a fantastic punch on their smug face. I want to hit hard because the deliverer of the comment is usually a self-satisfied tube.

But I never do it and I would strongly encourage you to do the same. Resist the temptation. It’s not worth it. But trust me, that’s the only time in this blog that I’m going to advise you to suppress your primeval urges.

To those of you who don’t know this landscape, a MAMIL is a Middle Aged Man in Lycra. Originally a marketing term, it was coined by Mintel analyst Michael Oliver in 2010.

In the intervening years, the connotations for MAMIL have grown to be unkind. MAMIL is now a jibe. The inference is you’re no longer the man you once were, but you’re still trying to be.

Having lost the power and grace of his prime, we’re informed the MAMIL is vainly trying to fight back Old Father Time by covering his blubbery body in Lycra and riding his bike – usually quite slowly – but as often as he possibly can. And of course, the underlying supposition is that all this exercise at over 40 years of age is the manifestation of the classic ‘Mid-Life Crisis’. 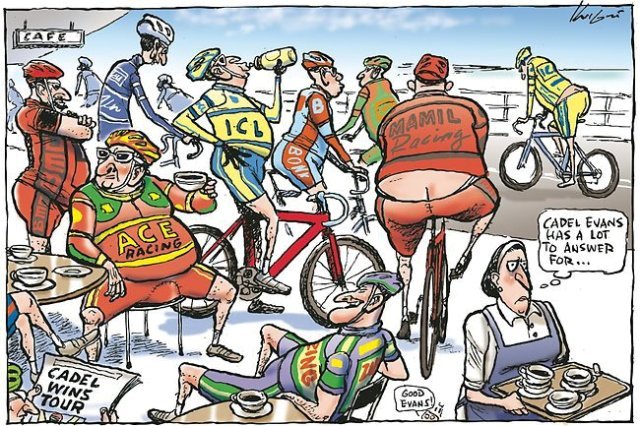 Truth be told, many MAMILs out there have to put up with a lot of crap. But it doesn’t have to be so. And if all of this sounds drearily familiar, then I beg you to read on. In fact, don’t just read, study and absorb. This blog could save your life.

Now, let’s begin. If you’ve timidly pushed your hand in the air and confessed to being a browbeaten MAMIL, that’s okay. But here’s a newsflash. The first rule of being a MAMIL is stop apologising for being a MAMIL.

Breaking news. You’re not doing anything wrong. So you like to ride your bike in the fresh air? So you enjoy the company of your friends? So you’re not averse to sitting in the café for as long as you actually spent on the bike ride? So what? What’s the big deal? It’s called having a bloody life.

Exercise, friendship and the camaraderie of breaking bread. We’ve been doing it since the dawn of time. These are all very natural, healthy pursuits.

And the key word to remember here is ‘natural’. The New York Times bestseller, Born to Run by Christopher McDougall is one of the most brilliant books I’ve ever read. It should be on every school curriculum. An engrossing page turner, McDougall uses a spellbinding narrative to convince beyond doubt that the homo sapien was literally designed to run. It’s what God intended us to do. In order to hunt animals and flee from danger, we are genetically hard-wired to run in the same way as fish are designed to swim.

But not only does Born to Run prove that exercise is entirely natural, it forcibly demonstrates that our current lifestyle is fundamentally unnatural.

In terms of human evolution, it’s only a blink of an eye since we were all hunter gatherers. We spent most of the day on our feet, hunting, farming – moving. We ate meat, fruit and vegetables.

But since the Industrial Revolution, we’ve become more and more sedentary, and we eat more and more processed foods like bread, cakes, chocolate and crisps.

The norm is to sit. We sit for an hour as we drive to work. When we get to the office, we sit again. Then we waddle to the vending machine, buy a bar of chocolate, then it’s back to the swivel chair.

At lunch, we sit and eat sandwiches. Then it’s another four or five hours of inactivity, hunched over a keyboard or telephone. Not moving. Not burning calories. Not maintaining muscle mass or increasing bone density. Our spines curved. Our hips tightening. And all the time, getting more and more stressed.

And it’s the accumulation of stress which is arguably the greatest concern. Or, to be more precise, it’s the overexposure to cortisol, the hormone released by the body under stress which is modern life’s greatest crime against Mother Nature.

Paddy Heaney tackles the mighty Benbradagh, the toughest climb on Man of Sperrin.

Cortisol is our fight or flight hormone. When we feel under threat or attack, cortisol is secreted into our system.

In the days of sabre-toothed tigers, cortisol helped protect us from predators. In those days, once the threat had passed, and we’d safely climbed the nearest tree, our hormone levels returned to normal.

Today, we’re no longer under threat from wild animals but the sense of threat often feels much more prolonged. Cut off by a reckless driver en route to work, cortisol starts pumping first thing in the morning. But there is no release valve.

Stuck in the car, there is no escape. Then, entrapped in an open plan prison for nine hours, the fight or flight reaction can remain turned on during the pressure and strain of a normal working day. It continues to stay on during the stressful drive home.

Research has shown that the long-term activation of the stress-response system – and the subsequent overexposure to cortisol and other stress hormones – can disrupt almost all our body’s processes. This puts you at increased risk of numerous health problems, including:

Now, a simple request. Please score through the problems you haven’t yet encountered. If you’ve drawn a line through every one of them, well done. The good news is you’re stress free. The bad news is you’re a complete psychopath. You shouldn’t be in Lycra. You should be in a strait jacket.

For everyone else, it will be a relief to learn that the number one stress management strategy for these problems does not require any private health insurance. Nor will you be required to go on a NHS waiting list.

Because the best way to tackle stress is to eat a healthy diet, get regular exercise, plenty of sleep and foster healthy friendships.

For the MAMILs among us, that means we should ride our bikes, shoulder to shoulder, as often as we can. And don’t skip the café stop either. Remember, friendships are important too.

Moreover, it’s not a mid-life crisis. It’s the doctor’s orders.

Because there are worse things in life than being a MAMIL. You can always spend your week chained to a desk, do no exercise, and become increasingly fat and unfit. Then one day in the not too distant future, you can become a MAMIAC.

Middle Aged Man In A Coffin.

Paddy Heaney owns the Train Station gym in Maghera. An unapologetic MAMIL, Paddy is currently training hard and partially starving himself so he can race competitively – and complete The Man of Sperrin. Paddy’s primary ambition is to be faster than his friends and not to crash.