Spokesman: Do you have a bike problem?

Home/Uncategorized/Spokesman: Do you have a bike problem?
Previous Next

Spokesman: Do you have a bike problem?

Are you a bike addict? The fact you’re reading this blog suggests you’ve already got a problem.

But if you’re unsure, please take the survey below:

DO I HAVE A BIKE PROBLEM? 10 SIGNS YOU’RE A BIKE ADDICT

A. a hit song by Diana Ross?
B. the company which appears most often on your credit card bill?

3) Do you frequently lie about the cost of your equipment and gear?

4) Do you automatically know the wind direction which suits your favourite segments on Strava?

5) Your ride doesn’t upload to Strava. Does this:

A. mildly irritate you?
B. ruin your entire day?

7) You lose a lot of weight. You start to look gaunt. A friends wonders if you are unwell. Does this:

A. mildly irritate you?
B. make you intensely happy?

A. A jar of honey?
B. the website you dream about appearing on?

9) Which would you prefer:

A. A trip to Disney with your spouse/partner and children?
B. A bike trip with the lads in Mallorca?

10) In your quiet moments, when reflecting on what might have been, do you honestly believe you could’ve been a pro?

If you answered ‘yes’ or ‘B’ to six or more of the above questions, you can give yourself a big pat on the back. Well done, comrade, you’ve got a profound bike problem. Or, as members of our fraternity prefer to say: ‘kudos’.

The descent into full blown bike addiction is a very individual experience. For some, the journey is slow, gradual and insidious. Like ivy, it creeps up on them. And like ivy, it eventually envelopes them completely.

For others, the addiction is dramatic and explosive. Like when Michael Corleone sees Apollonia for the first time. The attraction is instant, and the need for more is insatiable.

My own story even baffles me. One day I was your bog standard Gaelic footballer who wouldn’t be seen dead in a pair of white boots. The next thing I know I’m standing in the bathroom getting the hair on my legs removed by my wife*. How did that happen?

I’m still not entirely sure. But I know one thing. I can still identify the precise moment in time when I fell head over heels in love with le vélo.

It happened in South Armagh. Having stopped playing football, and run a couple of marathons, I’d decided to dabble my toes in the world of triathlon. My first foray was the excellent sprint triathlon which takes place in Camlough.

A complete greenhorn, I turned up on a bike with straight handlebars. Surrounded by gleaming Giants, Specializeds, Treks and Cannondales, I felt like a complete wab.

I’d bought a commuter bike. When I asked the man in the shop if I could use my new steed for triathlons, he assured me it was perfectly fit for that purpose. He wasn’t lying. He just neglected to tell me that I’d look like Mary Poppins.

Anyway, after swallowing the embarrassment, I pressed on and not long after the swim, I found myself steaming along a section of rolling hills. Because I was so heavy, I found that I was overtaking a large group of riders on the downhill segments.

Naturally enough, these serious triathletes took grave exception to being passed by someone riding his granda’s bike. So, on the climbs, they’d claw their way past me.

Competitive maniac that I am, and sensing the contempt in which I was being held, I would then bury myself on the descents, pass them, and try to increase my advantage on the flats. Then a hill would come, and they’d overtake me again. This continued for mile after mile.

It took a while for the realisation to occur. I was so consumed by the running duel that everything else in the world had ceased to exist. But from nowhere it dawned on me that I was indescribably happy.

It was like a drug-induced high. Despite the fact that I was expending every grain of energy in my body, there was no pain. Such was the exhilaration, it was all effortless. That was the day when everything changed… 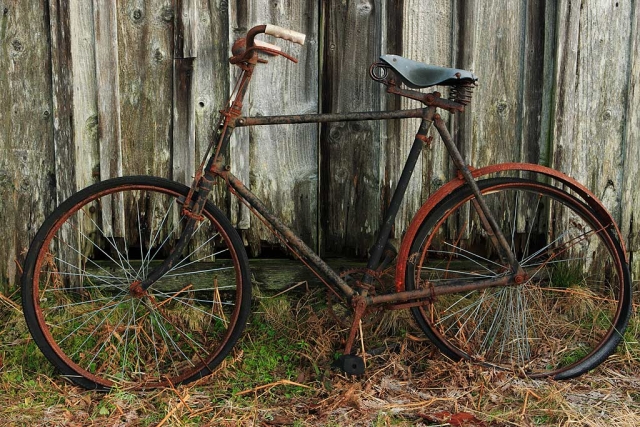 Seven years have passed since that fateful day in Camlough and my addiction has advanced very nicely, thank you. By normal people’s standards, they’d probably say I was a chronic case.  I disagree.

As any self-respecting junkie knows, the trick to coping and functioning with an addiction is to surround yourself with other junkies. That way, you don’t feel so bad – as there will always be someone who is worse than you.

Fortunately a lot of my friends are pretty bad cases, which is extremely beneficial as I can use their deeds to justify my own misdemeanours.

Take Stephen for example. Stephen had started to race and his coach had told him he should get a new power meter. But Stephen had recently bought a new bike (£2000), and new wheels (£500) and a new Garmin Edge (£220). The new power meter was £400. When he eventually plucked up the courage, Stephen timidly told his wife that he wanted to buy a new gadget. His wife looked at him – and that was the end of that. Or so Stephen’s wife thought.

A few months later, the good lady informed Stephen that she wanted to buy him a new power meter for Christmas. At first Stephen tried to brush it off. He said it was okay, he could manage without one. But she persisted. Like a dog with a bone, she wanted to know which model he wanted and where she could buy it.

It was at this juncture Stephen put his hands up and confessed. He’d already bought the power meter.

Fortunately for Stephen during the subsequent inquisition by his wife, he was able to point to the story of our friend Franco, whose deceptive purchasing made his £400 power meter look like chicken feed.

Franco’s decline was one of the swiftest in history. His brother gave him his first bike. It was an entry level Vitus – a real gate. Franco weighs 11 stone and the Vitus weighed about the same.

But ignorance was bliss and Franco was content. Then he went on holiday to Tenerife and hired a Pinarello with electronic gears. Franco quickly realised he’d been slumming it – and Franco is not the type of man who likes to live rough. 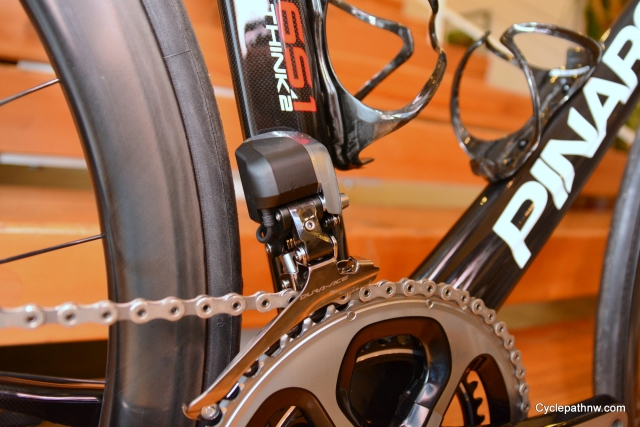 Not long after returning home, Franco splashed out on a spanking new Pinarello with a Shimano Di2 groupset. Franco told his wife the £3000 bike cost £1100.

Franco was so proud and protective of his new bike that he kept it in the house.

A schoolboy error. When a female friend of Franco’s wife saw the bike she couldn’t stop admiring it.  A keen cyclist, she recognised quality when she saw it.

“It would need to be,” said Franco’s wife dismissively.

The two ladies had a chat.

Paddy Heaney runs the Train Station Gym in Maghera where he helps cyclists become fitter, faster, leaner and stronger. Paddy dreams of having 8% body fat, an FTP of 400 watts and a new Colnago. He has a major problem.